It’s true, simple stuffing > fancy add on stuffing. Croissant pieces enhance the buttery, crisp exterior of this purist recipe. No frills, no fuss. After years of making and consuming stuffing, I’m certain that Simple Is Best. That’s why I take most of my notes from Victoria Granof in this recipe.

Scroll down for the recipe 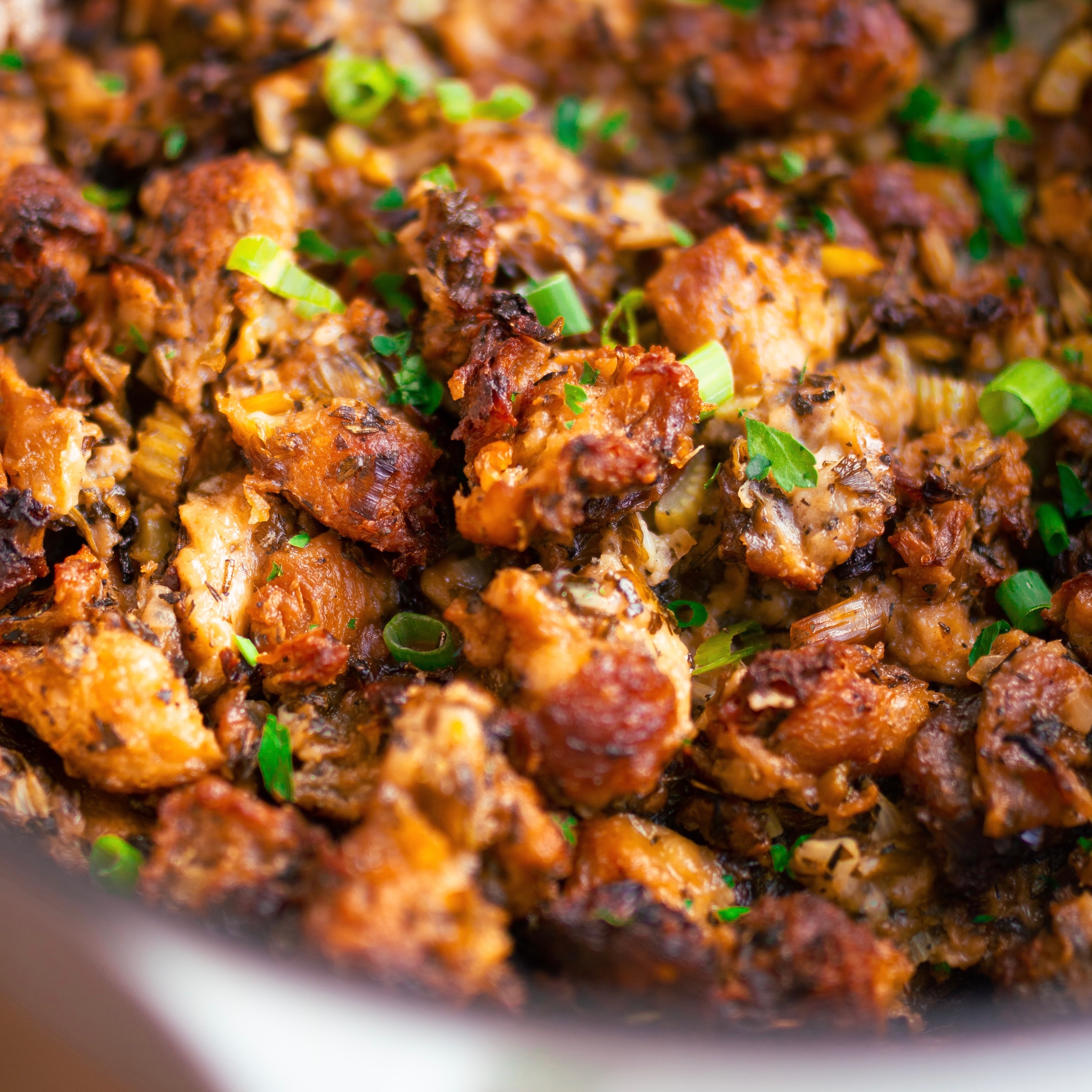 At least a day before stuffing-eating day, rip your bread and croissants into 1 inch sized pieces and store uncovered (to dry them out) until showtime. On the day of stuffing-eating, preheat the oven to 250°. Scatter the croissant/bread pieces in a single layer on a rimmed baking sheet. Bake the  pieces, stirring occasionally, until dried out, about 1 hour. Let them cool, then transfer to a very large bowl.

Chop the celery, scallions, and onions. Set aside the dark green ends of the scallions for later. Meanwhile, melt 3/4 cup butter in a large skillet over medium-high heat; add the whites of the scallions, chopped onions, and celery. Stir often until just beginning to brown, about 10 minutes.

Stir in all of the herbs to the celery mix and then remove the pan from heat. Add this entire mixture to the large bowl of croissants and bread pieces. Sprinkle in salt and pepper, then drizzle in 1 ¼ cups of broth and toss gently.

Preheat oven to 350°. Whisk in the remaining 1 ¼ cups broth and eggs in a small bowl. Add to stuffing mixture; fold gently until thoroughly combined. Transfer the mix into a buttered 9x13 baking dish, cover loosely with foil, and bake about 40 minutes..

Remove the foil and continue to bake, uncovered, for another 40 minutes or until the stuffing looks set and does not appear wet. The tops should appear crispy and golden brown all around.

Once the stuffing is complete and ready to serve, sprinkle the chopped green ends of the scallions on top for garnish.

Do Ahead: Dressing can be baked (before browning) 1 day ahead. Uncover and let cool, then cover and chill. Uncover and bake until top is browned and crisp, 50–60 minutes.

chicken broth?
Veggie stock will do!

Tell me if you maked this!

Direct any questions or comments you have to my instagram at: @reeniekarim